The polygon depicted in (a) is convex, and so are a straight line, a triangle, a rectangle, and more generally, any convex polygon, a circle, and the entire plane. On the other hand, the polygon shown in (b) is not convex because there are some pairs of points for which the connecting line segment is not completely contained within the polygon. An immediate consequence of the definition follows:

is the set of all linear combinations of P (smallest linear subspace containing P). For instance, if P = \left \{ p \right \} \subset \mathbb{R}^{2} \setminus \left \{ 0 \right \} then lin(P) is the line through p and the origin. Similarly, the affine hull

Convexity can also be described in a very similar way algebraically:

With Proposition 3 and Observation 2, we can define convex hull as:

In a similar way we want to describe convex sets using as few entities as possible, which leads to the notion of extreme point, as defined below.

Essentially, the following proposition shows that the term vertex above is well defined.

\text{A convex polytope in } \mathbb{R}^{d} \text{ is the convex hull of its vertices.} 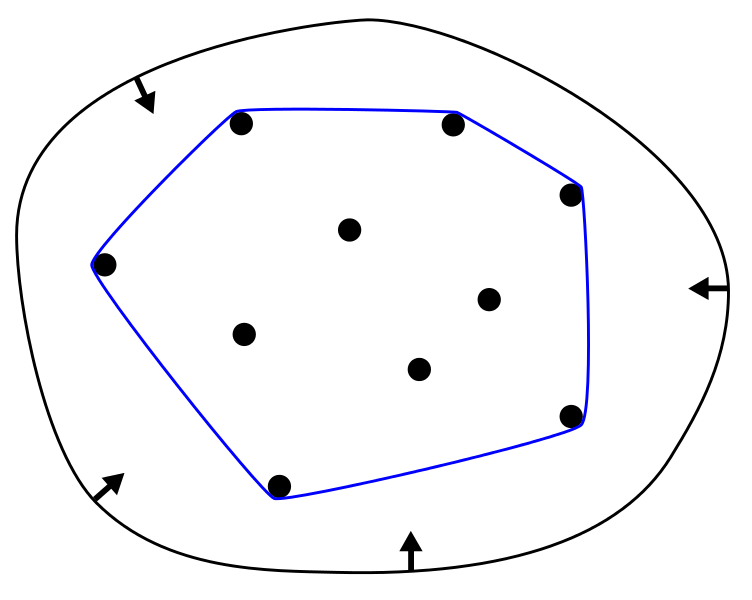 Intuitively, the convex hull of a set of n points in the plane is the smallest convex polygon that contains all of them either inside or on its boundary. A formal definition of the convex hull that is applicable to arbitrary sets, including sets of points that happen to lie on the same line, follows:

The convex hull of a set S of points is the smallest convex set containing S.

The following algorithms construct the convex hull of a finite point set P \subseteq \mathbb{R}^{2}. Time complexity of each algorithm is stated in terms of the number of inputs points n and the number of points on the hull h. Note that in the worst case h may be as large as n.

Find a point p_{0} that is a vertex of conv(P) (e.g., the one with smallest x-coordinate). “Wrap” P starting from p_{0}, i.e., always find the next vertex of conv(P) as the one that is leftmost with respect to the direction given by the previous two vertices. 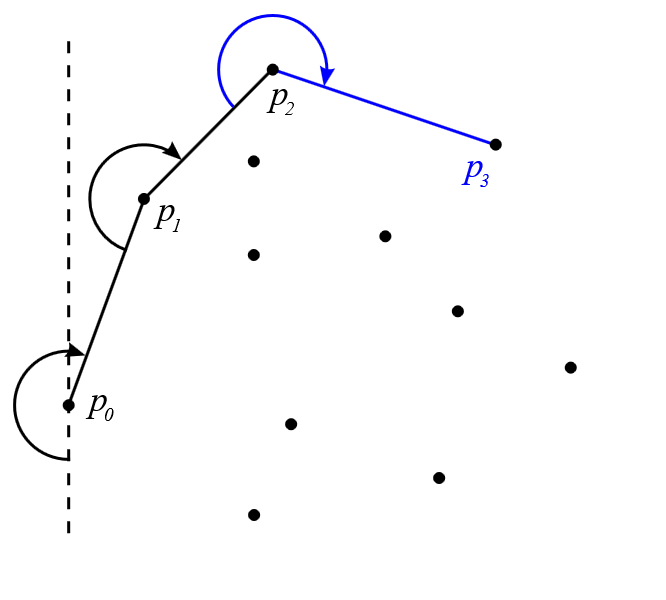 The algorithm may have to cope with various degeneracies:

A C++ implementation of Jarvis March can be found here.

This algorithm for computing the convex hull of a set P of n points in the plane consists of the following three parts:

When we return to the base point p_{0}, at which point stack S stores the vertices of the convex hull of P in counterclockwise order.

A C++ implementation of Graham Scan can be found here.

An animation of Graham Scan can be found here.

This algorithm first sorts the points lexicographically (first by x-coordinate, and in case of a tie, by y-coordinate), and then constructs the upper and the lower hulls of the points in O\left ( n \right ) time. 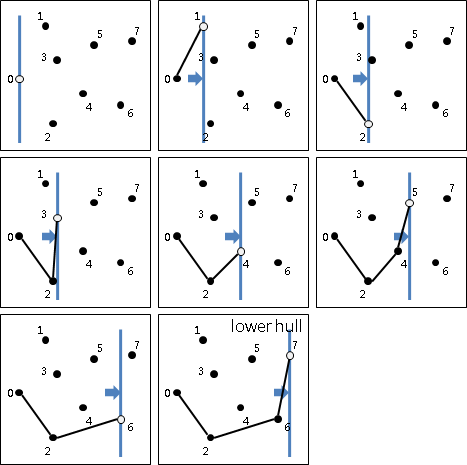 A C++ implementation of Andrew’s Monotone Chain can be found here.

Let S be a set of n > 1 points p_{1}\left ( x_{1}, y_{1} \right ),...p_{n}\left ( x_{n}, y_{n} \right ) in the Cartesian plane. We assume that the points are sorted in nondecreasing order of their x coordinates, with ties resolved by increasing order of the y coordinates of the points involved. The leftmost point p_{1} and the rightmost point p_{n} are two distinct extreme points of the set’s convex hull. 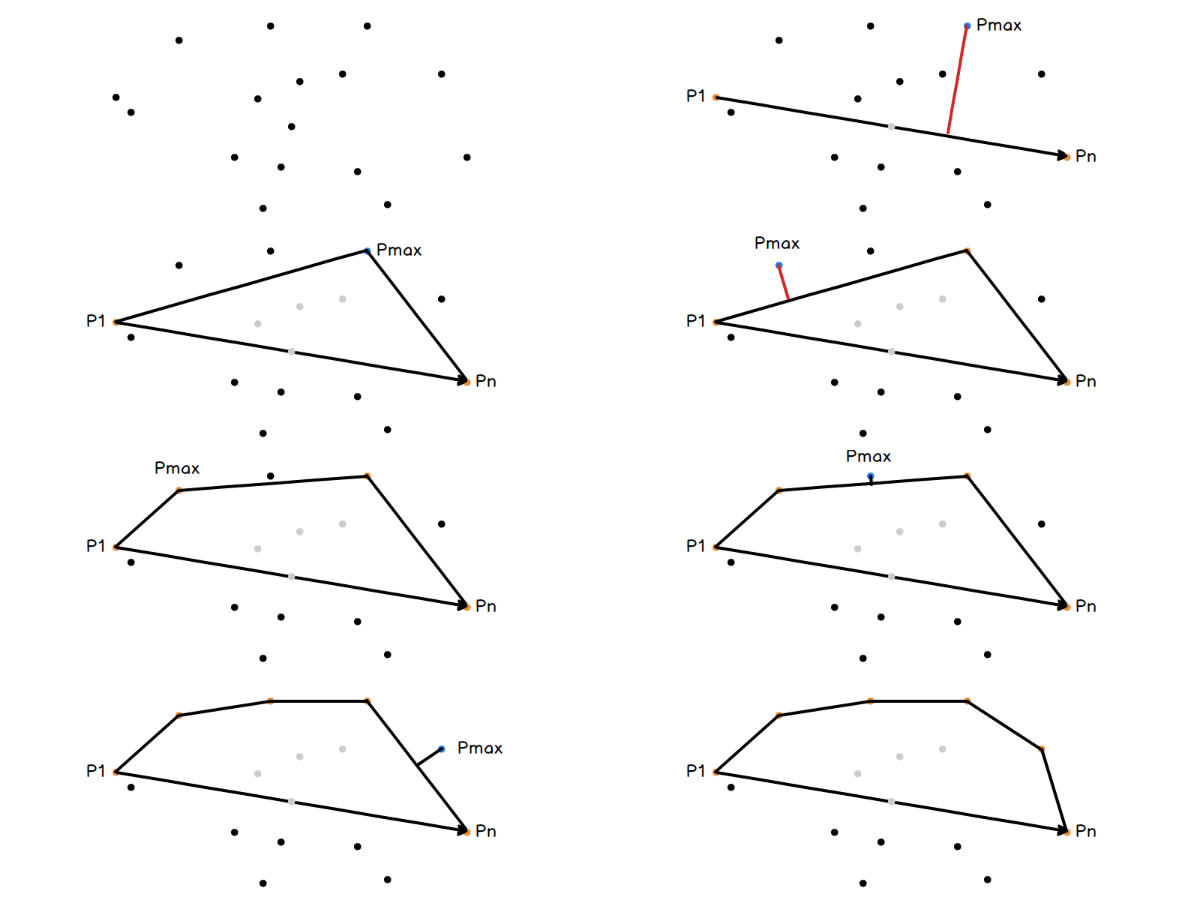 A C++ implementation of Quick Hull can be found here.

An animation of Quick Hull can be found here.

Like Monotone Chain, we need to sort the points lexicographically, then the original set S can be divided into two sets L and R: L containing the leftmost \left \lceil n/2 \right \rceil points and R containing the rightmost \left \lfloor n/2 \right \rfloor points. Compute the convex hulls of the subsets L and R recursively, say CH(L) and CH(R). For the convex hull of a set contains 3 or less points is the set itself, we can return them immediately. 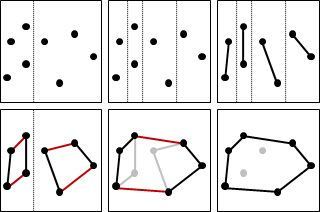 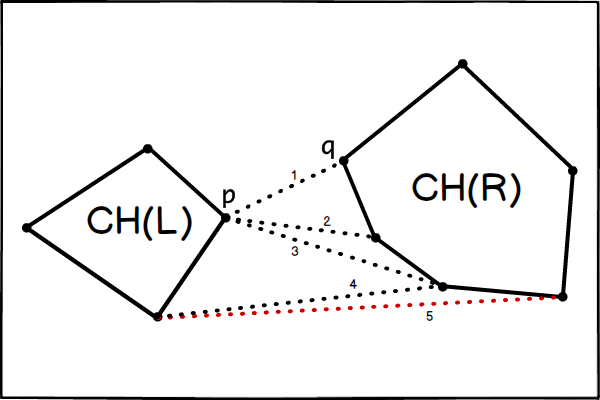 A C++ implementation of Divide and Conquer can be found here.

Choose three random points which are not colinear as the initial convex hull S. Find the leftmost point L in S and the rightmost point R in S, \vec{LR} separates S into two hulls: the upper hull and the lower hull.

Here we use two balanced binary search trees(say T_{u} and T_{l} ) to represent the upper hull and the lower hull. The internal nodes store the x-coordinate of the point and the point itself, as follows: 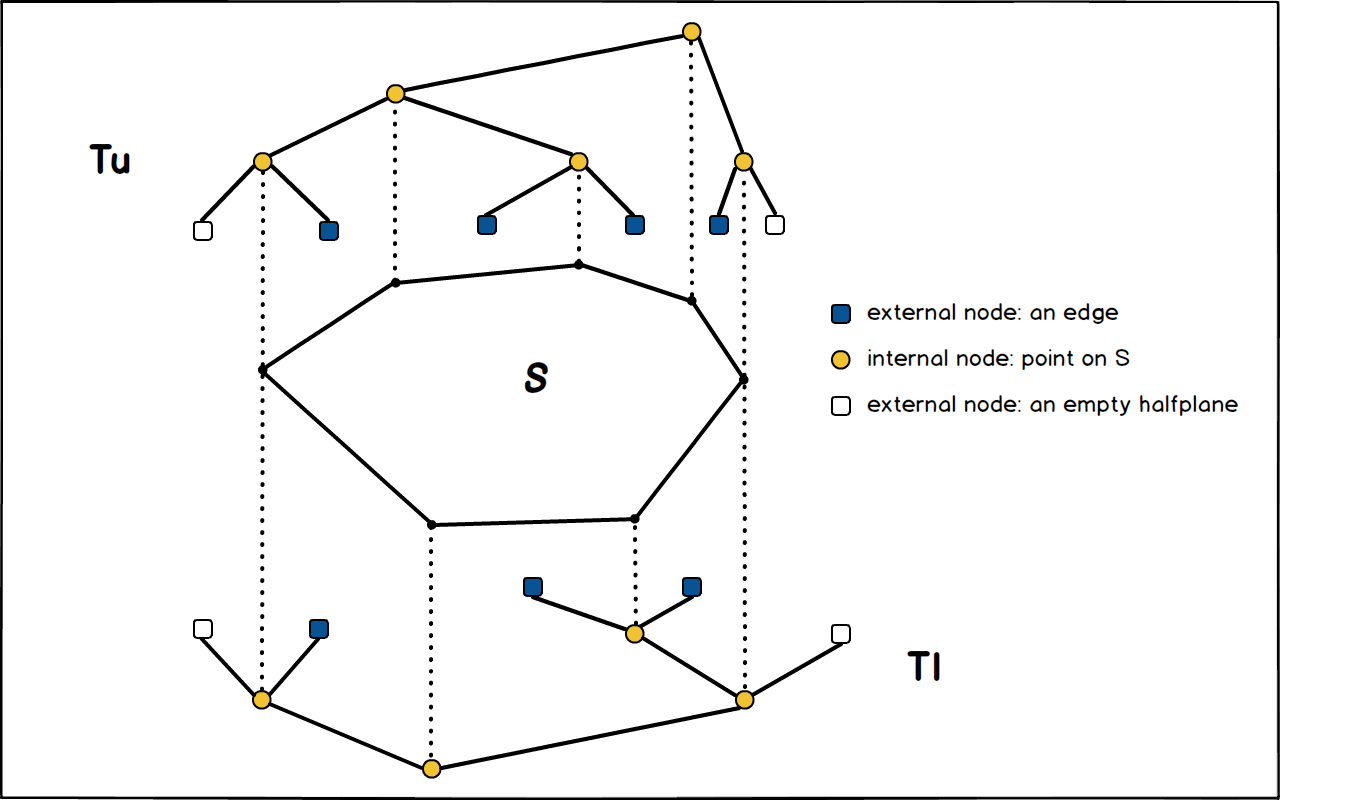 The incremental algorithm consists of two operations: locate(q) and insert(q): 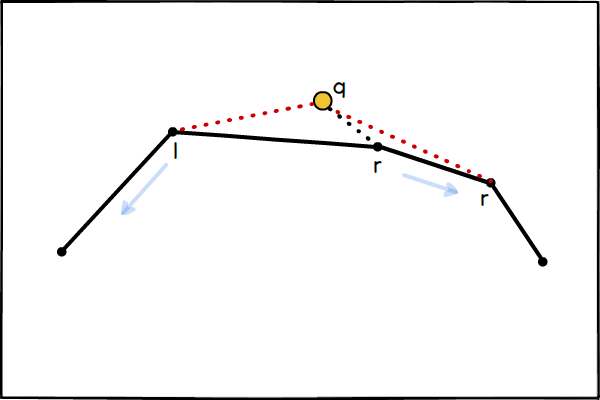 The upper hull and the lower hull can then be concatenated to form the complete convex hull. 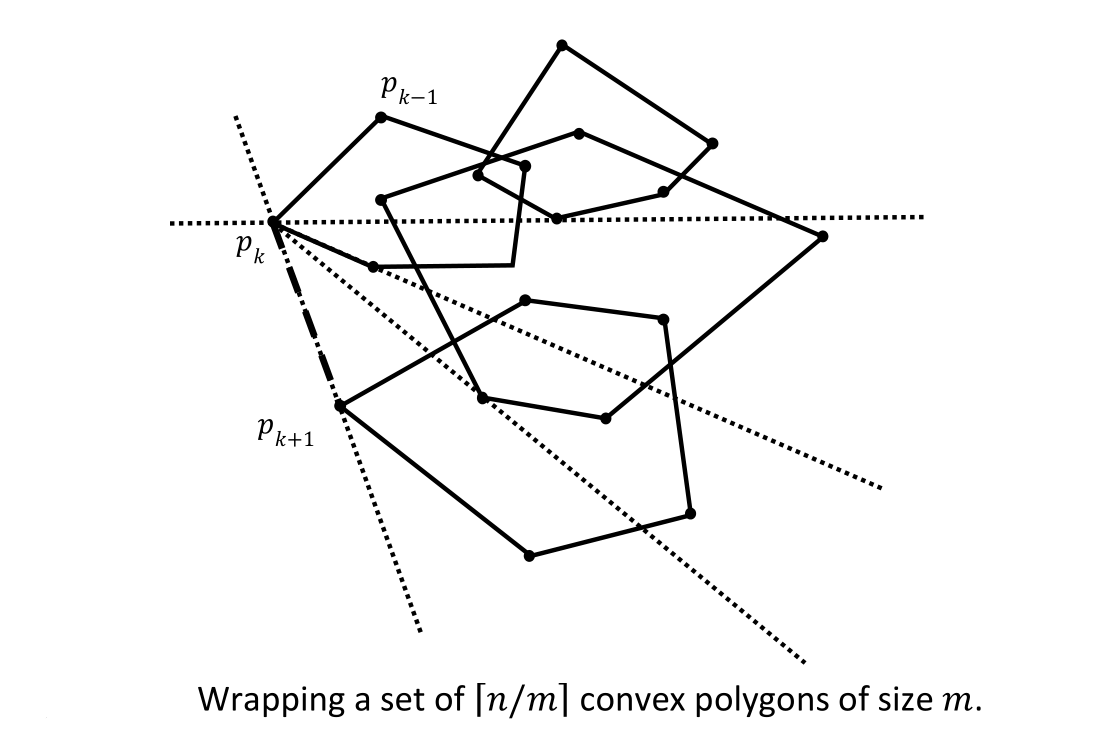 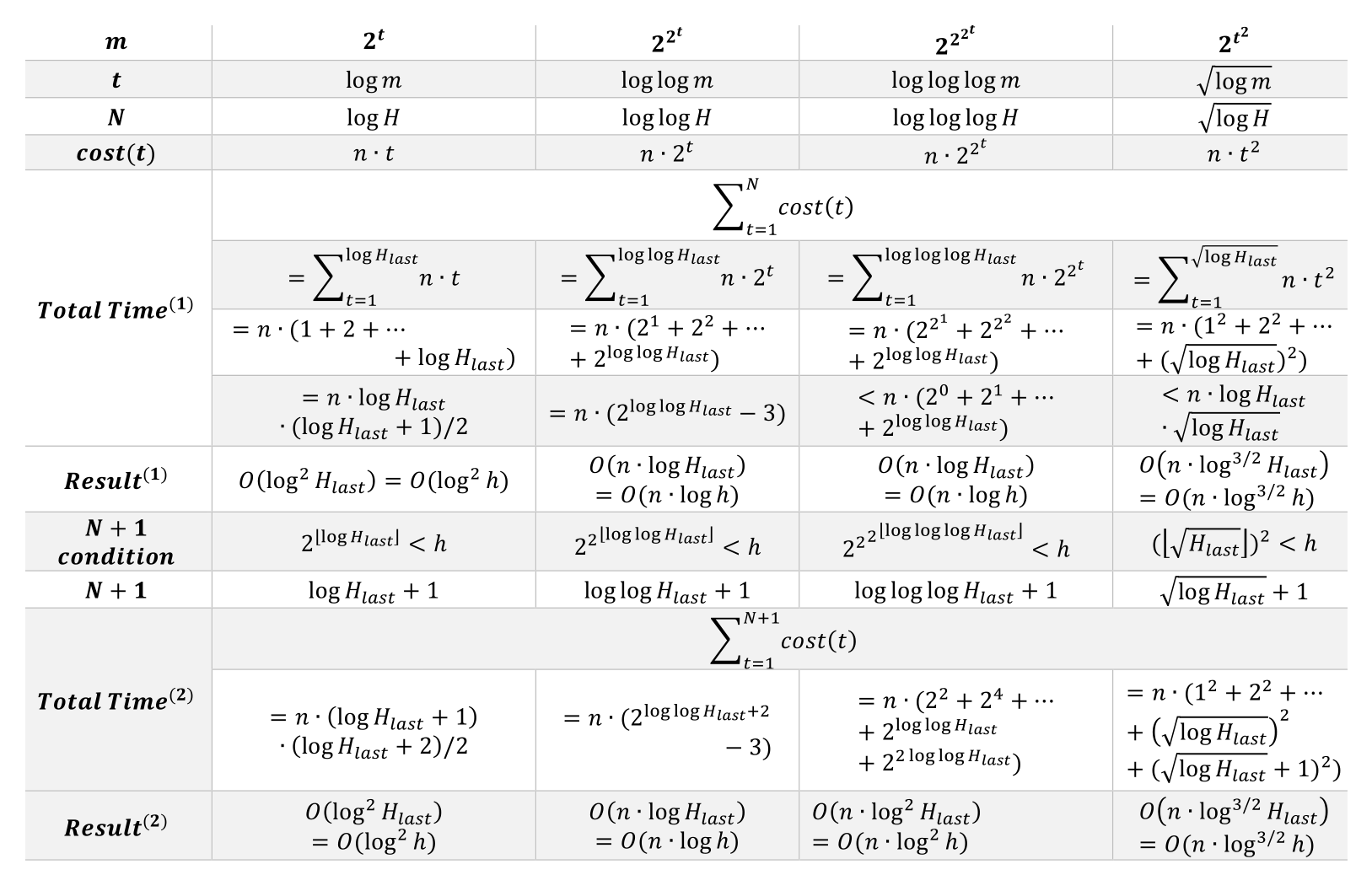 Chan’s paper contains several suggestions that may improve the practical performance of the algorithm, for example:

We can also achieve O \left ( n \cdot \log h \right ) running time using a variant of the earlier divide-and-conquer algorithm Quick Hull. This algorithm avoids the O \left ( n^2 \right ) worst-case running time by choosing an approximately balanced partition of the points; at the same time, the algorithm prunes away a large subset of the interior points whenever possible.

Consider the minimum and maximum x-coordinates of points in P, denoted x_{min} and x_{max}. Convex Hull of P can be be viewed as a pair of convex chains called the upper hull and the lower hull of P. The following algorithm will only compute the upper-hull of P, since the lower hull is symmetric.

We assume that the bottom line of the upper hull \overleftrightarrow{az} is horizontal, and that a lies to the left of z. This assumption can be enforced by a change of coordinates, but in fact, if everything is implemented using the correct algebraic primitives, no such transformation is necessary.

We start by arbitrarily pairing up the points in P. Let q,r be the pair whose connecting line has median slope among all n/2 pairs; we can find this pair in O \left ( n \right ) time. We now choose the pivot point p to be the point in P furthest above the line \overleftrightarrow{qr}, rather than the point furthest above the baseline \overleftrightarrow{az}.

Next we prune the set P as follows: For each pair s,t of points in P , we discard any point in the subset \left \{ a,z,p,s,t \right \} that is inside the convex hull of those five points. This pruning step automatically discards any points inside the triangle \bigtriangleup apz, just like the earlier algorithm, but other points may be removed as well.

Back to step (6), we can conclude that the subset LUH contains at most 3n/4 points . Consider a pair s,t from our arbitrary pairing of P. If both of these points are in LUH , they must satisfy two conditions:

By definition, less than half the pairs have slope larger than the median slope. Thus, in at least n/4 pairs, at least one point is not in LUH. Symmetrically, the subset RUH also contains at most 3n/4 points.

We step along the simple polygon chain, examining vertices v_{i} in the order they appear along the simple polygon chain. The deque \mathbf{D} stores the current convex hull. We step along the simple polygon chain until we find the first vertex v_{i} that lies outside of the convex hull specified by \mathbf{D}: the property of the polygon being simple guarantees that this test (to see if v_{i} lies inside the current hull or not) can be done in contant time by checking to see if v_{i} lies in the exterior cone determined by the point d_{b}=d_{t}. The fact that the polygon is simple implies that the only way for the polygon to emerge from the convex hull \mathbf{D} is for the polygon to exit the hull through one of the two edge (d_{b}d_{b+1} or d_{t-1}d_{t}) adjacent to the point d_{b}=d_{t} that last was added to \mathbf{D}(Exiting through another edge would imply that the polygon crossed itself). By localizing where the chain can erupt from the hull, we have a constant-time method to test if v_{i} is in the hull, and, if it is not, we can do repairs to \mathbf{D} by starting at a known point, d_{b}=d_{t} and popping / removing entries until we restore convexity.

At last, here is an online example of Melkman’s algorithm with a more intuitive explanation.