Posted: February 14, 2018 Under: Algorithm By admin No Comments

Back to I was in a startup company two years ago, we were going to develop an online video chatroom over WebRTC with a collaborative real-time editor to share codes or thoughts for online interviews. Starting to build the editor from scratch seemed quite challenging for us at that time, so we chose etherpad-lite, an open-source project derived from Google Wave(Apache Wave for now), since we didn’t have too many choices. After deploying etherpad-lite to our servers, we could hardly make the synchronizations smoothly enough, and the merging strategies kept bothering us too. Soon we degraded the editor with a speed-over-merging solution: synchronize the local changes to the server ASAP, solve the conflicts with the so-called last-write-wins(LWW) strategy at the server side, and then broadcast the latest version of text to all the other clients. The only problem is that this approach may cause data loss while two or more users concurrent typing at the same time, but it is a compromise we can put up with.

However, the most interesting part is how collaborative editing systems work. In this post, we’ll discuss several characteristics of collaborative editing systems, as well as the models to ensure the documents are consistent. Then we’ll describe the operational transformation algorithm in detail, and finally we’ll survey several approaches to operational transformation.

How about the traditional ways?

Every time before updating the document, each client needs to acquire an exclusive lock first. While a client is holding the exclusive lock, the other clients have to wait until the lock is released, this may make the synchronization significantly slow down, thus the editor would not be real-time.

Optimistic locking actually does not acquire any lock. Before updating, each transaction verifies that no other transaction has modified the resource it has just read. If the check reveals conflicting modifications, the updating transaction rolls back. However, for collaborative editing systems, the conflicts may occur quite often, and “roll back”s are not acceptable.

In the next sections, we will discuss the algorithms that operational transformation uses which make rollbacks unnecessary for resolving conflicts. But first, we need to get familiar with the concepts of consistency models.

In distributed systems, a consistency model is a contract between the system and the developer. The system guarantees that if the programmer follows the rules, memory will be consistent and the results of reading, writing, or updating memory will be predictable. Consistency models define rules for the apparent order and visibility of updates. For collaborative editing systems, several consistency models have been proposed. We here discuss one of the most commonly referenced models by Sun et al. AKA the CCI Model, in where three consistency properties are grouped together:

Each client(including the server in centralized OT system) in collaboration systems utilizing OT stores a local copy of the document on their own. OT actually doesn’t allow one to directly modify the local copy, instead, any modifications to the local copy have to be performed in terms of operations, which will be sent one by one to the server. After an operation is confirmed by the server, it will be transformed and propagated to all the clients to maintain a synchronized state. In case there are concurrent operations applying to a local copy, all the operations have to be performed in an FIFO queue.

The data models define the way data in a document are organized, different OT systems may have different data models. For example, the most basic data model is a single linear address space(like a string). For advanced data models, we may need more complex operations such as moving data between memory addresses. For example, JSON-based rich text editors like Quill can have edit operations on particular lookup paths of a JSON object.

For simplicity, in this post we assume the data is stored as a single string.

Operation models define the set of operations that can be directly transformed by OT functions. There are two basic approaches to supporting complex application-level operations for manipulating shared documents:

For an application with N different operations, N × N transformation functions are needed for supporting this application in both ways. 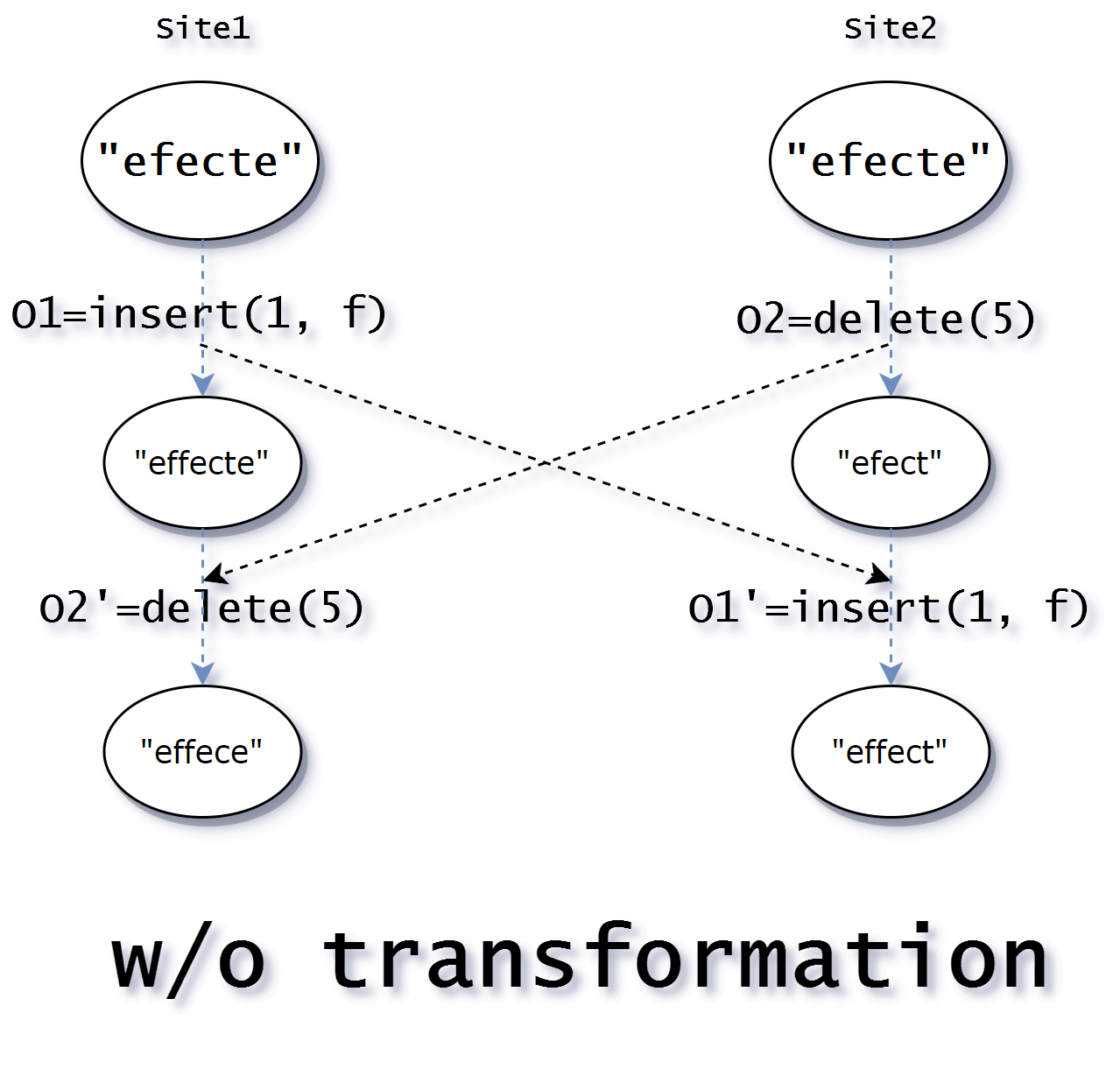 Now imagine that there are two sites working on a shared document represented by a sequence of characters. These characters are addressed from 0 to the end of the document. Initially, both copies hold the string "efecte". User 1 executes operation o_{1} = insert(1, ``f") to insert the character "f" at position 1. Concurrently, user 2 performs o_{2} = delete(5) to delete the character "e" at position 5. When o_{1} is received and executed on site 2, it produces the expected string "effect". But, when o_{2} is received on site 1, it does not take into account that o_{1} has been executed before it and it produces the string "effece". The result at site 1 is different from the result of site 2 and it apparently violates the intention of o_{2} since the last character "e", which was intended to be deleted, is still present in the final string. Consequently, we obtain a divergence between the two sites. It should be pointed out that even if a serialization protocol was used to require that all sites execute o_{1} and o_{2} in the same order to obtain an identical result "effece", this identical result is still inconsistent with the original intention of o_{2}. 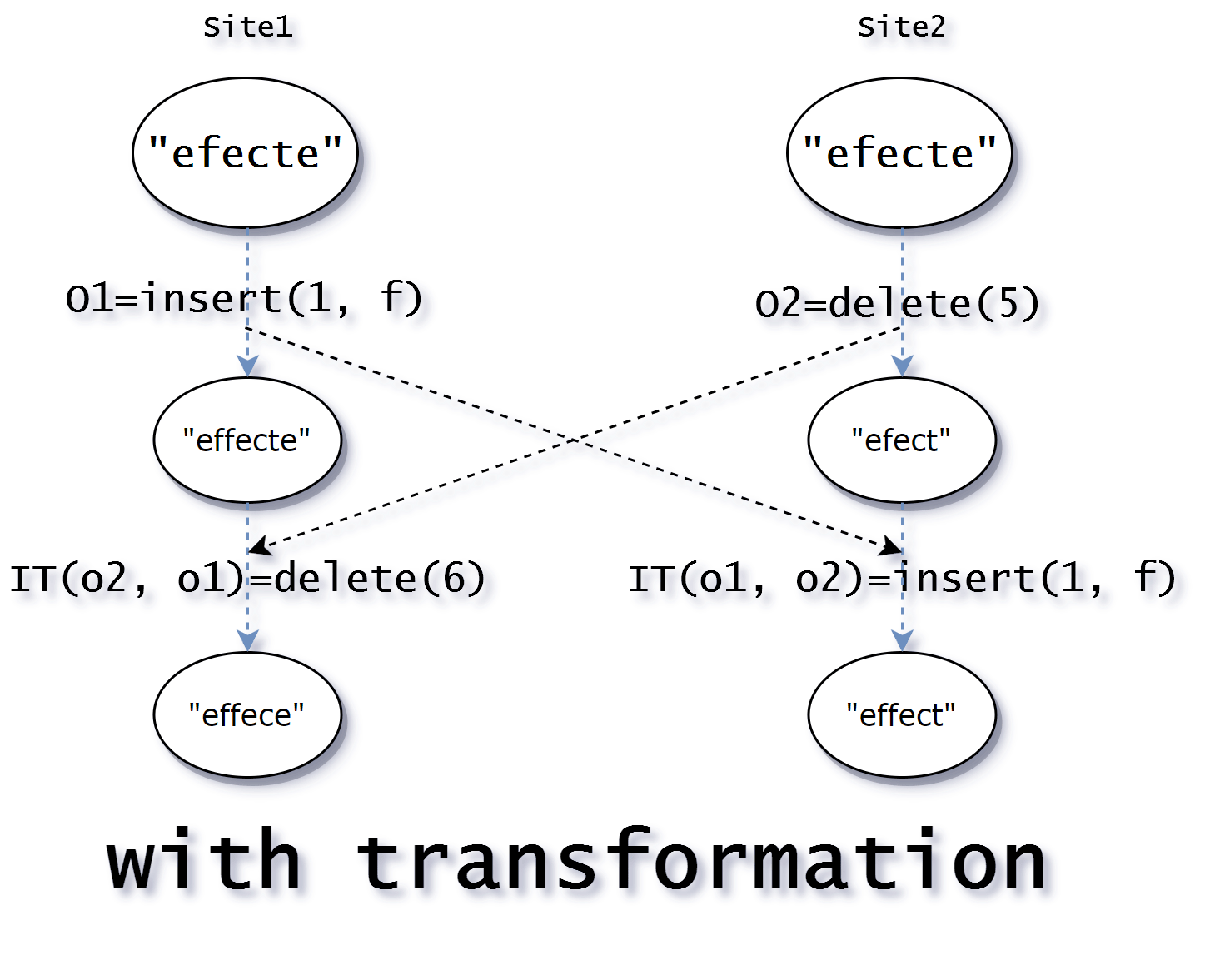 the inclusion transformation function in Ellis’s algorithm can be described as:

Convergence properties must generally be satisfied by all control algorithms, as part of the convergence guarantee in the consistency model. The following two properties are related to achieving convergence:

Here O_{A} \circ O_{B} denotes the sequence of operations containing O_{A} followed by O_{B}. CP1 is required only if the OT system allows any two operations to be executed in different orders.

CP2 is required only if the OT systems allows two operations be IT-transformed in two different document states (or contexts).

Similarly, there are three inverse properties that need to be satisfied to support the “group undo” operation.

IP1: Given a state S, and sequence of operations O \circ \overline{O}:

GROVE(GRoup Outline Viewing Editor) invented dOPT(distributed Operation Transformation) which consists of two components: one is the state vector timestamping scheme for ensuring the precedence property, and the other is the dOPT algorithm for ensuring the convergence property. The basic idea of the dOPT algorithm is that when an operation satisfies the precedence condition for execution, it is transformed against independent operations in the log(which saves executes operations in the order of their execution) in such a way that executions of the same set of properly transformed independent operations in different orders produce identified document states, thus ensuring the convergence property. For m operations, there is an m x m matrix of the inclusive transformation resultant functions, for each pair of operations.

Although dOPT is simple and satisfies many of the correctness properties, it fails in the case of the so-called dOPT puzzle, when an operation is concurrent with two or more other operations from different sites.

Jupiter, a multi-user remote collaboration virtual world developed at Xerox PARC by Nichols et al., addressed some of the issues found in dOPT. One of the major changes in Jupiter was to have a centralized coordination server that uses a change propagation algorithm to keep the clients updated and in check.

The xform technique is successful while the client and server are in the same starting state, but if the client and server diverge too much, then the operation must look back into its past history to properly calculate the converging operations. This is often done by keeping track of operation revision history, but not directly transforming saved messages, like dOPT does, which causes the incorrect scenario. Instead, Jupiter calculates past converging operations, even if it does not apply them, in order to generate the correct recent transformed operation.

Google Wave OT was a modification on top of the Jupiter algorithm. The main changes to the Jupiter control algorithm are mainly in the client/server communication protocol, as well as optimizing the transformation functions for batch updates.

Instead of sending client operations to the server whenever new operations are requested, the Google Wave OT client must wait for a server response before sending any more operations. In the meantime, the operations are composed together into a single buffer, and then sent together once the server has processed the last batch of operations and converged.

Finally, the transformation algorithm handles operations in streams, rather than as single discrete operations. These operation sequence streams are guaranteed to be in order, as well as linear, so the streaming transformations can be performed in linear time.

A more modern protocol for OT is based on the admissibility-based transformation (ABT) framework. TIPS, an implementation of ABT, builds on top of existing HTTP protocols, and also uses a centralized server.

Clients in TIPS are able to join or leave a session at any time, and the clients also independently decide to sync with the server. As with Google Wave OT, operations are buffered and synchronized with the server only at some particular server-determined interval. This is useful, as it can be easily adapted to JavaScript-based long polling methods, which are the traditional method of maintaining an open connection over the web.

Once the server has asked all of the clients to synchronize, each client that has responded will have their operations applied to an n-way merge algorithm, which will create a sequential set of operations as output. The clients receive this sequential set of operations in another interval, which is adapted by them through another algorithm, ITSQ, which performs the inclusion transformation step that updates the document correctly.

The benefit of TIPS over existing protocols is that it is more capable of allowing clients to dynamically enter and exit a particular OT session, as well as being more robust when dealing with client or network failures.